Down with the White Supremacist Patriarchy!

The WSP has wrecked havoc around the planet since its inception. “The first signs of patriarchy were the ancient humans of the Neolithic Era, which encompassed from about 10,200 BCE to between 4,500 and 2,000 BCE, who relied on a system where men were the hunters of a tribe and women the gatherers” [Source].

The idea of ownership and stewardship might have been a good one at the time it was first developed. But the idea has spiraled into a disease all over the planet for non-male, non-white people.

“During this time, the realization occurred that it took a male and female to produce offspring. It is theorized that with this realization, these Neolithic men first became aware in their role in paternity. These same men also began to take private ownership over their individual herds.  Prior to this development, the people of the Paleolithic Era had shared both land and supplies. With this new concept of ownership came the desire to have private herds left to the descendants of the owner. Because of this new desire, it became necessary for women to be virgins before marriage and for them to abstain from adultery after marriage so that men could have the reassurance that their offspring were their own (Lerner). With this new control over women began the earliest patriarchal families” [Source]. 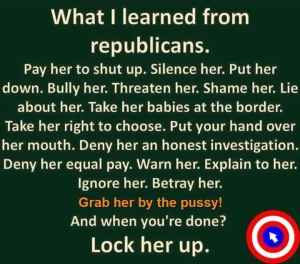 What is wrong with women? Are they simply afraid of men? White women support the White Supremacy Patriarchy. Why? We need to find the answer and change this paradigm, NOW! Black women have known since slavery that they could not rely on being protected by black men. Asian men made laws to drown the first child if it is a girl. This is absolute insanity!

If they are blind to the terror and torment they have caused on the planet, perhaps, it is time women pluck out men’s eyes and feed them to the fish!

If this doesn’t happen soon, the women of the world will lose the fight for equality, equal pay, and respect for their bodies. Meanwhile, white men will continue to marginalize everyone until they are stranded in a sea of irrelevance.